If you are interested in retail, at some point, you are sure to have made a pilgrimage to Euroshop, the first-rate international trade fair held in Düsseldorf every three years. Which gives us an opportunity to take the pulse of international retail.

With the sector currently in the throes of a profound transformation, perhaps comparable to the introduction of self-service, it may well be a good idea to share our feelings about this year’s edition (from 16th to 20th February). I use the verb ‘to feel’ because it is more inextricably linked to the brain than verbs such as ‘to see’, ’to hear’ or ‘to touch’.Consolidated aspects

To understand what is going on now, one method that is often useful is comparing the latest developments with trends that were detected some time ago. We can then identify aspects that were previously at the embryonic stage that have now matured. Take these four examples:

The next big thing

Certain other aspects are all set for generalized adoption, such as the following three features:

Certain aspects, such as the following pair, were practically nowhere to be seen in the last edition, three years ago:

1) Multi-channel has a strong presence and is widely discussed. In fact, it has steadily become the main ‘hot topic’ at international retail congresses over the last three years. Complete hardware and software solutions are now on offer, which enable customers to buy a product that is not currently available in stores. Alternatively, they can order from the comfort of their sofa using their tablet (e-shop).

However, I get the sensation that this multi-channel approach is generally conducted from the physical store, rather than placing the customer at the centre. For instance, there were a lot of interactive screens to be used in-store, as though they were large tablets.

But there were not many solutions to be seen that are developed from the starting point of the customer looking for a piece of furniture on the internet, for example, who then checks it out at the store before finally making the purchase away from the store.

2) One of the biggest surprises has been to see how several companies are playing a type of ‘game of Lego’, mixing various pieces, none of which are new, but which, when arranged together, achieve some really interesting results. For example, resolving a key challenge: how can customers get more detailed information, when they want it, above and beyond the simple trinomial of brand, model and price. This has been achieved in an extremely practical way by interlinking elements from very different sources: sensors (RFID, movement, etc.) placed on products, multimedia screens on the displays, databases with multimedia content, social networks and e-mail connections, links with the CRM for the customer card, in-situ payment methods, etc.

On the flight home, two main doubts came to my mind.

The first was a concern that, with so many tools to grab attention at the point of sale, are we not in danger of tiring out the cortex, creating an ‘enlightened commotion’, a more attractive sensory contamination, efficient at that instant but ineffective in the long run?

Research has shown us that customer loyalty is achieved more through the reduction of effort than the ‘wow’ effect (Dixon, Freeman & Toman, 2010). We also know that the human brain is suited to habits and making non-conscious purchase decisions. Not much has been seen from this perspective.

The second concern was that, with amazon.com making headway in so many sectors, as invisibly as it is convincingly, is it not the case that Euroshop and we ourselves are focusing too much on improving physical stores, rather than creating On-Off type integrated systems without gaps? The online sales departments of retail chains will probably tend to vanish from the organization chart, to become just another service offered by the store.
_____________
Bibliography 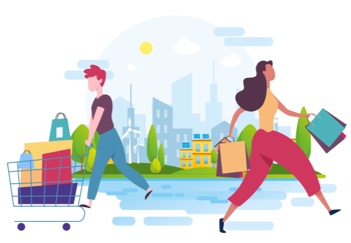 Marisa Anglés talks in Expansión about the collaboration of our agency m+f=! with IKEA.