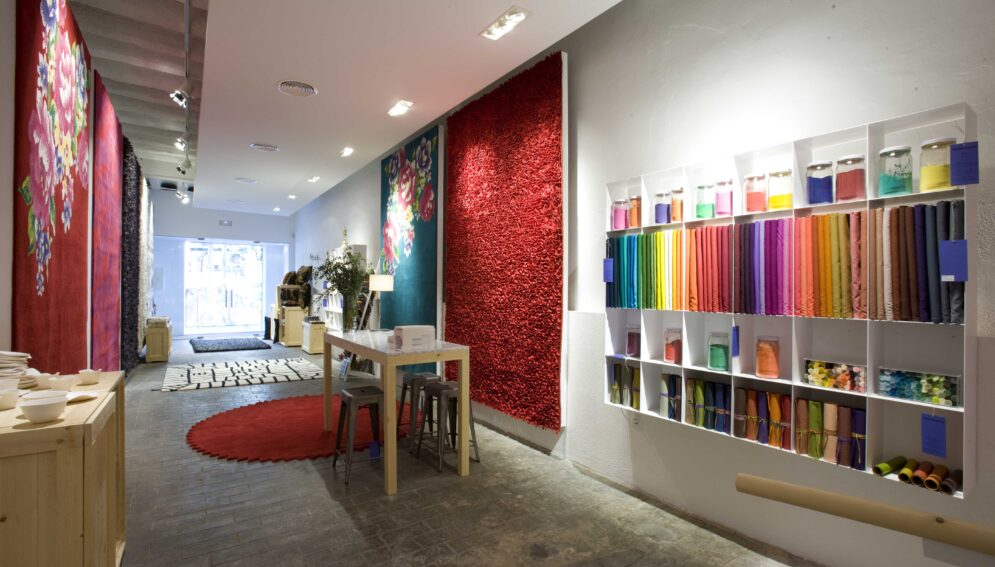 Nani Marquina won the “2010 Shop Prize”, an award that is granted to the best stores in Barcelona. Her shop opened in december 2009, with the mission to offer designer carpets throughout a 650 m2 space, situated on Rosellon Street, on the corner with Diagonal Avenue.

Nani Marquina is the engine of the company named after her. She is an entrepreneur who not only fashions carpets -awarded on several occasions, too-, but also her own brand. She’s resolute, tenacious and assertive in her facet as a businesswoman. But on the other side, she’s also openly playful as a designer.

The shop is the actual reflection of her spirit. It is framed within an austere container: an antique garage, newly refurbished. Its cement floors and naked walls are brightened up by designer carpets, some of them hung in the air, like stars amidst a cloudy night.

A splash of history
At the very start, Nani Marquina began selling her creations in the usual way, through third parties, which were often specialised home decor shops. These used to say that her carpets were difficult to market and expensive at that, and therefore didn’t give them enough space within the stores, which in turn made her products less appealing and even harder to sell.

It was crystal clear to Nani Marquina that the specialists wouldn’t go for her brand, so she decided to launch a new channel: direct sales to the public by means of her own shop. This is how the retail project was born, a story with very good prospects.

In the first year, Nani Marquina SL attained 2,6 million euros in turnover, out of which she exported around 60%. In 2011, the shop alone obtained 30% of its turnover from the Spanish market, which translates into 320.000 euros or, what’s the same, about 492 euros per m2 and year.

However the company, like most concentrated on home accessories, has seen how its turnover has dropped by 34% since 2007, because of the contraction in demand, both in Spain and abroad. Nevertheless, the negative impact is smaller than that of the sector due to two things, mainly: the strength of the brand -whose main motor is design- and the decision to allocate resources in other markets beyond the Spanish one, such as the USA or France.

Who does Nani Marquina enthrall?
Locals and tourists alike are bound to her spell, in particular those who appreciate contemporary design in home products and have a medium to high purchasing power.

The shopping process tends to be long, because it is of an involving kind. Customers usually start by visiting the virtual shop window on the internet, so when they arrive at the actual brick and mortar premises, they are pretty well informed. In spite of that, they do love personal advice once they set a foot in the store.

This kind of shopping is slow and deliberate, unhurried, for it is part of the leisure time of customers. For this reason, Nani Marquina upholds that shops should be able to open on bank holidays, too.

The triple charm
The premises consist of three floors:

The ground floor has two entrances like hallways, both enhanced with some of her carpets.

The first floor is visible and easy to access by means of a ramp. It is decorated with rather more formal carpets, with a premium touch, amongst which one can find some creations developed with other independent designers.

Likewise, the semi-subterranean floor is in full view and can be accessed by a ramp as well. This area displays more informal rugs, from patchwork to chill-out, with  such a style that the entire ambience becomes suggestive. The patterns allow your imagination to get carried away… No wonder this room is also available for presentations, talks and other events.

As regards to the actual exhibition of the carpets, Marquina arranges them on the ground or hangs them from the walls. The latter are a treat for the senses: they can be admired from a distance or close-up, and they can be touched and experienced much more fully. Since this is not their usual position, they are also understood differently. The entire environment has been taken care of in every detail, whereby all the individual products match so perfectly with each other, that they look like a giant work of art.

Nani Marquina, the brand
Nani Marquina, daughter of an industrial designer, wants to arouse certain perceptions in those people who enjoy the art of carpets. She does this by selecting specific colours and textures.

When one rolls out a rug in a room, the human senses perceive a transformation (the object suddenly starts shining with a different light). Users feel warmth and a growing attachment to the piece of genius -and both sensations are highly gratifying.

In addition to this, the designer conceives every product with three main values.

Reminiscing tradition. Marquina strives to recover -if not reuse- something that still exists but might shortly fall into oblivion, be it the old knowledge of the trade, the traditional techniques or themes from the past. She is always drawn towards rediscovering something in disuse, like for instance, the garage itself which she decided to turn into a shop. Many big adventures start in a garage.

Breathtaking fusion. Nani Marquina doesn’t only dwell in the past, she also embraces contemporaneity. She becomes inspired in tradition so as to retrieve something unique, yet respecting its origin.  Thus, new creations are produced with ancient techniques or traditional fabrics, and alluring results.

A touch of mischief. Her art has, in my opinion, a third register: a glimpse from childhood. When we are children, we are more daring, very bold, and extremely imaginative. This indomitable spirit is still alive and thriving in Nani Marquina carpets.

In a nutshell, I perceive this brand as tradition rediscovered through contemporaneity, with a playful and eye-catching twist.

Her retail challenge
The carpet shop has a considerable challenge. No matter how attractive its creations are, it isn’t possible to launch lots of new items every year. In consequence: A pretty rug shop could end up becoming a pretty museum (in the classic sense, where everything is unchangeable).

To avoid this risk, the shop employs three techniques:

1) It relocates some carpets, thus originating new clusters, or in other words, new aesthetically matching groups.

2) It complements its carpets with certain home product categories, such as objects with history, spiritual design, and diverse origins, like India or Japan. Their presence, aside from that of the rugs, is only temporary.

The main role of these elements is to spice up a dish, just like pepper, with a hint of variety and surprise in an inventory -that logically- can’t rotate that often throughout the year.

In their labels, the shop not only indicates the price, but tells the story of every product. Whoever knows about brands, shall be well aware of the power of narrative and storytelling.

3) It organises customer events, for in this shop… stuff happens. It holds all sorts of events for many public segments, children included.

Flying lessons
By analysing this shop we have learned aplenty, although we could highlight four issues as the most important: